Ethics and compliance officers might believe that this weekend’s standoff on the steps of the Lincoln Memorial, between high school student Nick Sandmann and Native American activist Nathan Phillips, has nothing to do with their profession — no larger lessons for Corporate America, no insights about ethics worth our consideration.

We’d be wrong. As messy as that spectacle and every that came after it may be, they deserve a long, deep look. These two days of drama over Sandmann and Phillips say quite a lot about organizational ethics, corporate culture, and risk in our age of social media. So for better or worse, let’s look.

By now you’ve probably heard the story, or at least some version of it — which actually is the most telling point of all here. In the world of social media, we are awash in dueling narratives.

First came the photo, streaking across social media Saturday afternoon: Sandmann, a junior at Covington Catholic High School, looking smug and wearing his MAGA hat; standing in the way of the wispy but resolute Nathan Phillips, banging his drum and chanting some Native American song. From that photo, Sandmann looks like a spoiled upper-class kid, leading a cosseted life, trying to intimidate a frailer, older man.

Then came the videos, and lots of them, hours later. One shows what happened before Sandmann and Phillips squared off. A large group of Covington students were squabbling with three members of the Black Hebrew Israelites. The students shouted school chants at the Israelites; the Israelites shouted back at them. Phillips glides onto the scene, approaching the students, trying to reduce the tension. They mock his presence, jumping in rhythm to his drumming — more ignorant and annoying than hostile.

Another video shows what happened around Sandmann and Phillips. While they stood there, another Native American activist kept arguing with other Covington students. That man suggested the white students “go back to Europe where you came from.” One Covington student then took it further, saying “why don’t we all go back to Africa” where humans originated millions of years ago. Ignorance on both sides.

I went down that Rashomon rabbit hole for a reason. Social media creates multiple versions of one event. Literally, we have multiple perspectives, recorded from different angles across different periods of time, for the same incident.

So as different groups compete to prove that their interpretation is correct, they start searching for other evidence — evidence that can ascribe motive and intent to whatever action is captured in video.

This is where ethics and compliance officers should start feeling uneasy. Because when the Twitterati start looking for more evidence, your organization might get pulled into the fray.

For example, Covington Catholic High School’s history and reputation have been put under a microscope. We now know that the school’s faculty seems entirely white; that a fellow classmate was accused of rape twice in 2018; that minority and gay students felt persecuted and driven away.

OK, you’re thinking — that’s awkward for the school, but does this really affect Corporate America?

Funny you should ask. Twitterati also figured out that Covington Catholic is a 12-minute drive from Procter & Gamble, which owns Gillette, which just put out that commercial about toxic masculinity. So, the Twitterati asked, do any Gillette employees send their sons to a school like that?

You know the Gillette ad? about toxic masculinity? Gillette is owned by P&G. P&G is in Cincinnati across the river from Covington.

it’s potentially possible that someone who worked on that product team has a kid in Covington Catholic in DC behaving toxically.

I have no idea whether any Gillette employees send their children to Covington, nor is doing so inherently wrong. But I’ll bet my mortgage payment that the P&G ethics and compliance team wasn’t thinking three days ago that their brand would be pulled into a controversy like this.

Gillette isn’t alone. Eleven minutes in the opposite direction is a local office of Fidelity Investments. Sandmann’s mother has been identified as a vice president there, prompting the likes of this:

@Fidelity We have been with Fidelity for over 40 years.  Do you always hire employees from Covington, KY who tweet Racism and Hatred? Because if you do, we are no longer with Fidelity. Fire her ass!

U.S. Bank and St. Elizabeth Healthcare list themselves as corporate sponsors of Covington Catholic. Rest assured, the Twitterati have been calling them to the carpet, too.

Ethics and compliance professionals can learn so much from the Sandmann-Phillips debacle because it captures so much of what social media allows people to do.

Above all, social media allows people to prosecute their grievances. It allows people to form alliances that previously couldn’t be formed, and gather supporting evidence that previously couldn’t be gathered. Then they present their arguments in a self-selecting court of opinion that resembles an echo chamber more than anything else, and declare their own victory according to standards of proof they set themselves.

That’s just as true whether you want to call Covington Catholic a racist school, or Sandmann’s critics a leftist mob. 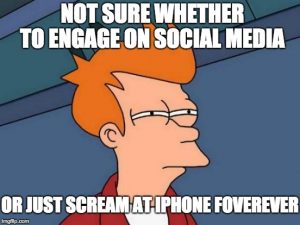 Businesses, especially those businesses that deal with consumers, are trapped in the pressures of that cycle. They don’t want to stand apart from the moral fray and be depicted as indifferent. Yet stepping into the fray inevitably means associating your brand with one set of ethical values some other side wants to disprove — and they’ll do it by seeking to paint the business as hypocritical, unless your company takes some action they want.

For example, if any of these boys’ parents do work at Gillette — well, many people would want the parent fired; the parent is contributing to the toxic masculinity that Gillette claims to oppose. If Gillette doesn’t fire that parent, these critics will say, then Gillette isn’t really serious about toxic masculinity; it’s only interested in being on the popular side of a current issue, so people will buy its razor blades.

That’s a weak spot for large corporations. They don’t want consumers and employees to believe the company’s ethical culture is hypocritical pap. Once people believe the organization has committed that sin, they’ll believe your organization is open to committing any sin, because it doesn’t hold itself accountable to the ethical standards it proclaims.

So I’ll bet another mortgage payment that Gillette, Fidelity, US Bank and all the rest are hoping none of their employees are ID’ed as attending this weekend’s rally.

Is any of this best use of society’s time? No, but then, social media generally isn’t. We have a long road ahead before society understands how to use social media wisely.

Regardless, what Sandmann and Phillips sparked this weekend provides a fascinating glimpse into what social media allows people to do, and how peripheral parties can be splattered by someone else’s misconduct.

So the lessons are worth considering, before it happens to you.