Another huge Compliance Jobs Report this week! The long-time head of compliance at Ford has gone to La-Z-Boy, and we have other compliance moves at NYC Housing Authority, KBR, Pearson, ADM, and more. Ameren Corp. is looking for its first-ever CCO. And our Meme of the Week goes out to everyone sharing compliance metrics across the enterprise.

We begin this week back at the Securities & Exchange Commission, where the Lord giveth and the Lord taketh away. One week after the Trump Administration moved forward with nominating Allison Lee to fill a long-vacant Democratic commissioner seat at the SEC comes word that the agency’s other Democratic commissioner, Robert Jackson, wants to go back to teaching this fall. Democrats may try to persuade Jackson to remain in office until his successor gets confirmed.

Big news from Detroit: Raphael Richmond, global director of compliance at Ford Motor Co. since 2013, left that role this month to be director of corporate compliance and employment law at La-Z-Boy. Richmond, a delightful person, had been with Ford in various roles for 22 years. One assumes she has a comfortable chair in her new office.

The troubled New York City Housing Authority has overhauled its compliance function. Out is Vilma Huertas, who had been chief compliance officer at the agency since last July. She was criticized as an insider and political appointee with little true compliance officer experience. (Huertas will remain as a special adviser to the NYCHA chair, which sounds like political patronage job to me.)

Deena King has left her job as director of compliance at Texas Woman’s University to be chief compliance officer at another school, although King hasn’t yet declared where that is. Now running point for ethics and compliance at TWU are Kimberly Grubb and Katherine Antwi Green.

Mark Speck, long-time compliance and audit chief at CPA Global until 2017, and then running his own consulting business for two years, just turned up as CFO at Maslow Media. Speck says he will “make sure this company has compliance as part of DNA” (good) and has high hopes for the Red Sox this year (improbable).

Irina Lazieva just took a job as chief counsel for anti-corruption compliance at KBR. Lazieva had previously worked at 3M for nearly six years in various roles, and most recently was 3M’s senior compliance counsel for investigations. Unclear whether Lazieva will relocate from Minneapolis to Houston — ideal in January, less so in August.

Lisa Fine, last seen in November leaving her job as director of global compliance at the Gate Group, has turned up at Pearson as director of compliance for the Americas region. Fine goes from working in suburban Virginia to downtown Washington. #winning

Archer Daniels Midland has promoted Mary Phillips to regional compliance officer for Latin America and the Caribbean. Phillips has been with ADM since 2011 in numerous international compliance roles.

Changing of the guard at Heritage Bank Corp. in Nigeria: chief compliance officer Adewumi Adeniyi is stepping down from the bank after 37 years of service. He will be succeeded by Oluwatomi Ojo. Nice picture of Adeniyi’s farewell cake in the Nigeria Business Post.

And in Chile, Andres Toledo has joined BHP as a compliance specialist. He comes to BHP from SQM, another mining business working in South America, where he held a similar role.

Stoica Mihaela-Corina is celebrating one year at Erste Bank in Romania, where she is head of financial services compliance.

Standard Chartered is looking for a director of anti-bribery and corruption compliance for Europe and the Americas. Job is based in London.

Ameren Corp., a gas and electric utility based in St. Louis, is looking to fill a newly created chief ethics and compliance officer role. Recruiting firm Major, Lindsey & Africa is handling the placement.

The Federal Retirement Thrift Investment Board is recruiting a chief audit executive. Job is based in Washington. JDG Search is handling the placement.

Meme of the Week 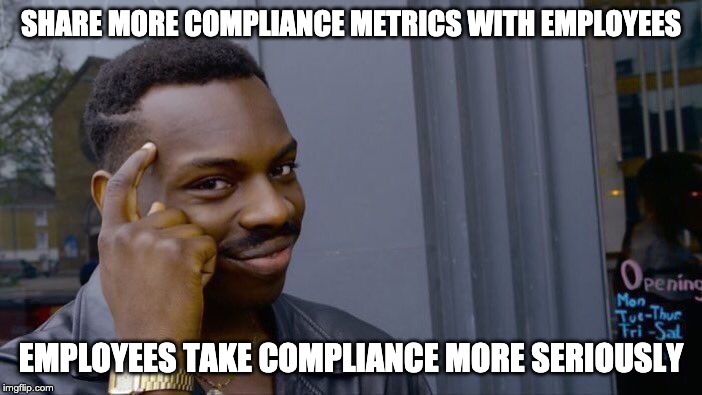 That’s all for the week ending April 19. Happy Easter and Passover to all. As always — if you have a tip or want to brag about your new job, promotion, career milestone, or anything else, email me at [email protected] or find me on LinkedIn. I’m always happy to give credit to the many hard-working people here in our corner of the business universe.