Ethics and compliance officers often need to consider the psychology of whistleblower retaliation and the culture of silence around corporate misconduct. Why do groups of people tolerate things they know are wrong? Why do people punish those who sound the alarm, rather than join them in defense of what’s right?

As you ponder those questions, you’d do well to read a column in the New York Times this week from Peter Wehner — a long-time Republican Party operative, prolific writer and conservative thinker, and implacable critic of President Trump. Wehner used his column to ask those same questions of Republican politicians and their slavish devotion to Trump.

Even the president demonstrates his unfitness for office anew every day, Wehner wondered, why do so many Republican politicians keep supporting this guy?

Much of his column dwells on political forces that shape Republican lawmakers’ thinking, and we can dispense with those. But Wehner also devotes a fair bit of attention to the psychological forces that affect any large organization — including corporations, where understanding those forces is crucial if you want to develop a strong culture of internal reporting and anti-retaliation.

So what did Wehner conclude?

First he talked with a psychologist acquaintance about what happens when a new leader forces people to compromise their ethical values and accommodate his or her behavior. That pressure leads to this:

Gee, that sounds familiar. It sounds like any number of incompetent or corrupt leaders who cow employees into silence and obedience. It sounds like any number of cowed and obedient employees who then pounce on would-be whistleblowers — because by calling out the leader, those whistleblowers are also implicitly faulting everyone else who did nothing.

Of course, everyone else knows the misconduct is there, and they probably hate it. They just can’t muster the courage to speak against it — and the longer they stay silent, the easier it becomes to remain silent. 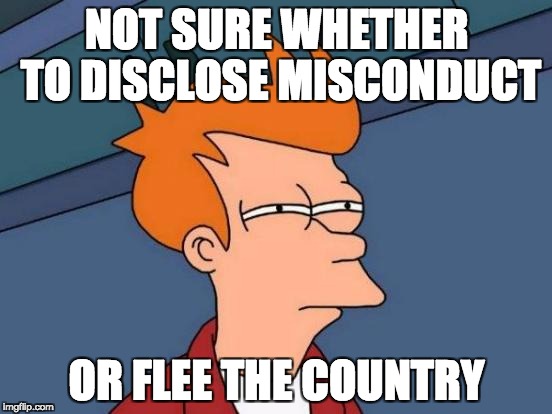 This is the sunk-costs fallacy: you keep working on a dud project because keep working on a dud project because you’ve already spent so much money on it, rather than cut your losses for something more lucrative. In poker, it’s when you keep playing a weak hand because you’ve already tossed lots of money into the pot, rather than folding and waiting for the next hand.

Those compromises people make also explain why whistleblowing is so rare: because most times, it requires someone to admit his or her own moral failures and complicity. People don’t like to do that. It goes beyond admitting a mistake, to admitting that you’ve been an ethically weak person.

Wehner and his psychologist friend discussed that, too:

We have two other nuances to consider in the corporate realm that don’t quite exist in the political one.

First, ethical compromise can lead to complicity in very real ways, with legal culpability or career consequences attached. That is, state or local Republican stalwarts who worship at the altar of Trump will never be charged as accessories to Trump’s campaign finance violations or solicitations of foreign interference in U.S. elections. But a middle manager who turns a blind eye to a senior executive’s fraud could eventually find himself on the unemployment line or the wrong end of an enforcement action, once the reckoning comes due.

Second, employees also have another alternative to speaking up: they can quit. That allows them to preserve their ethical sensibilities, without the risks of whistleblowing. A compliance officer can’t fault an employee for that, either. They owe the company honest work in exchange for a paycheck, nothing more. The rest is them acting in their own interests.

All of those forces come into play as compliance officers strive to build a culture of ethics and compliance. It’s not easy. Wehner explores what this all means for the Republican Party, but the issues he raises are just as valid for corporations. Don’t let what happened to the GOP happen to your organization too.