Don’t look now, but the Supreme Court may be preparing to put a poisoned chalice in front of accounting firm Mazars, thanks to the Trump Administration’s battle to keep the president’s tax returns hidden from law enforcement and congressional oversight.

Mazars prepares Trump’s tax returns. So when Democrats took over Congress last year, the House Committee on Oversight and Reform subpoenaed the firm looking for said returns. Trump filed suit to block enforcement of that subpoena (and others from the New York district attorney), and the dispute has been winding its way through the courts ever since.

The Supreme Court is slated to hear three cases related to the president’s tax returns on May 12. On Monday, however, the court asked the parties involved to submit supplemental briefs about whether the political doctrine question applies here — that is, whether these disputes about President Trump’s taxes are really a just political beef between Congress and the White House, which the Supreme Court should leave well enough alone. 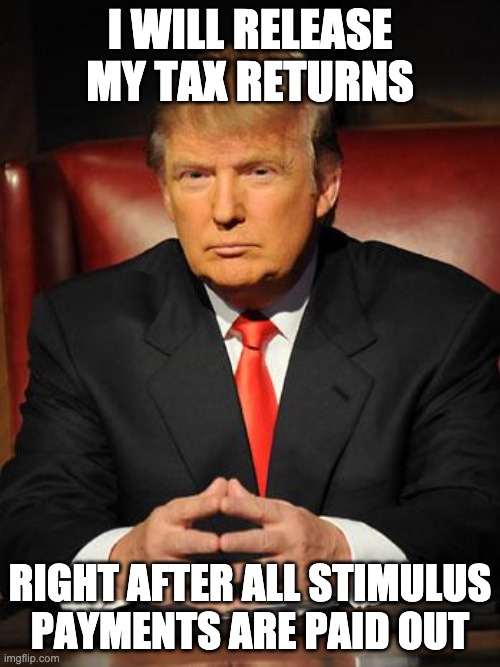 If the Supreme Court ultimately decides that the political doctrine question does apply, it could dismiss all three cases without ruling on the crucial question: Do Congress and local law enforcement have the authority to enforce subpoenas against the president and his business partners?

A ruling like that would be a mess. The president and his minions in the executive branch could ignore subpoenas from Congress, and Congress would have no mechanism to enforce the subpoenas short of impeachment or cutting some departmental budget.

On the other hand, Congress could subpoena third parties doing business with the president — like, I dunno, maybe an accounting firm whose name starts with “M.” The president would have no mechanism to block those parties from complying with such subpoenas either, short of threatening to cut business ties with that firm.

Which brings us back to Mazars and the poisoned chalice.

So far, Mazars has said it will comply with the subpoenas if ordered to do so by a court. That’s welcome, although nothing praiseworthy since obeying the law is a company’s job. But clearly at least some justices on the Supreme Court are considering a scenario where no court orders Mazars to comply with a subpoena.

So what would the firm do then?

After all, Mazars advises companies on corporate ethics and compliance. It prepares tax returns and audits financial statements, where it has a duty to report suspected misconduct or to cooperate with lawful investigations. It has a lovely Living by Our Values page, that talks about acting with integrity and independence and responsibility and all that other fun stuff.

Well, is the firm serious about upholding those values, or are those just words on a pretty page?

Because if the Supreme Court does dismiss these cases as political questions, neither Trump nor Congress will be able to prevent Mazars from doing whatever the firm wants to do. It could turn over Trump’s tax returns or sit on them forever.

Mazars would need to make a choice, and that choice would be a reflection of its commitment to the ethical values it claims to hold dear.

In theory, Mazars could argue that compliance imposes an undue burden — but how is providing the tax returns an undue burden? They’re documents already compiled, in Mazars’ possession. All the firm needs to do is send the relevant files by courier or email. That’s not a burden.

The plain truth is that Mazars has been trying to squirm away from this question since the start of things last year. It hasn’t even filed any briefs in the Supreme Court cases, only saying, “The dispute is between [Trump] and the Committee. Accordingly… Mazars USA takes no position on the legal issues raised.”

That dodge won’t work for much longer. If the Supreme Court does leave Mazars with the choice of whether or not to comply with the subpoena, and the firm’s leaders then decide not to hand over Trump’s tax returns — Mazars will be taking political sides to favor a powerful, lucrative client.

That’s wrong. Mazars couldn’t, with a straight face, keep counseling clients about what is or isn’t good conduct. So here’s hoping Mazars will make the obvious correct choice, to honor the subpoenas and turn over the tax returns promptly.

I appreciate that if Mazars does comply with the subpoenas, MAGA extremists will scorch the firm as complicit in the hoax or the Deep State or whatever they’re calling it these days. Trump will probably pull his business from the firm.

Well, nobody said doing the right thing is easy. Mazars could soon face the ultimate test of its commitment to the ethical principles it talks about — the principles it encourages its own clients to follow. If Mazars won’t follow those principles itself, you need to question the firm’s integrity and competence.

Of course the Supreme Court may go in a different direction with its ruling; we don’t yet know. At the least, however, keep watching this case.

Because Mazars, like so many others, may soon discover that doing business with President Trump carries a very high price.