Compliance officers have another case-study in flawed corporate culture and problematic leadership to consider. This one comes from the U.S. Army, in a blistering report on senior officers’ failure to prevent sexual assault at the Fort Hood military base.

The Army fired or suspended 14 senior officers Tuesday for their leadership failures at Fort Hood, a sprawling base in Texas with more than 36,000 soldiers. The base has been plagued with high rates of sexual assault and other crime for years, despite an Army-wide program in place since 2005 meant to reduce assaults and to hold offenders accountable more often. Its worst failure might be the case of Specialist Vanessa Guillén, who disappeared on April 22. She was murdered by a fellow soldier, who killed himself in June when he escaped Army investigators taking him into custody.

What happened to Guillén and other soldiers is outrage enough. Compliance officers, however, will want to examine how these failings happened. We had a large organization suffering from misconduct everyone knew about; and a program meant to remediate that misconduct, supposedly with support from senior leaders — and the program didn’t work. Sound familiar?

The Army impaneled a special commission to investigate the leadership and culture at Fort Hood, and that commission released a 152-page report on Tuesday. Even for those without a deep understanding of military operations, it’s an excellent report that touches on themes any compliance professional can appreciate. Let’s take a look.

First, the report faults senior officers for never truly supporting the program meant to reduce sexual harassment and assault, known as SHARP. Yes, the report said, those senior officers supported the idea of fewer sexual assaults and better treatment of female soldiers, and the trappings of an anti-assault program were in place — but senior leaders never embraced the SHARP program’s goals in spirit. Consider this passage:

This dearth of command emphasis on the SHARP Program allowed form to pervasively supersede substance across the installation… The end result has been a SHARP Program that appeared to be compliant on the surface, but was hollow and lacking in leadership attention, day-to-day implementation, broad acceptance by the enlisted soldiers, and full inculcation into the culture and character of the Fort Hood community.

Compliance officers should heed the warning in that message. Senior officers weren’t invested in the objective of changing the culture — and without that commitment, the SHARP program only responded to specific incidents that arose. The officers never used SHARP to its full potential, as a lever that could drive changes in the overall culture.

This makes me think of whistleblower hotlines. Imagine a world where the hotline’s sole purpose is to pass along allegations of misconduct that you, the compliance officer, then investigate; but you never use whistleblower allegations to paint a larger picture for the board and warn them, “Something is amiss here. We need deeper change.”

That’s a terrible scenario for any large organization: you have the trappings of an ethics and compliance program, but all that program does is warn people not to misbehave and then process complaints when they do anyway. If senior leaders don’t commit to changing the culture, then the misconduct will persist, your compliance program becomes a laughingstock, and morale among the workforce plummets.

That’s what happens when senior leaders only pay lip service to ethics and compliance objectives. So if your superiors ever ask why they need to work constantly at those things, tell them to read this report.

From that lack of engagement at the top, other failures cascaded downward throughout the ranks. That shouldn’t be news to corporate compliance officers; we’ve all seen the same dynamic in the private sector. The Fort Hood report just does an exceptionally good job at connecting all those dots in a vivid way. 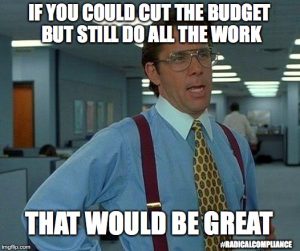 For example, from that disengagement at the top, the SHARP program was left to languish with too few resources and appropriate personnel. The base’s Criminal Investigations Division had too few staff trained to handle sexual assaults and unexplained deaths. Those staffers were over-worked and under-resourced. Investigations took too long to complete, complaints too long to adjudicate.

From those failures came more failures. Because the SHARP program was so inept, that led to mistakes such as failing to keep accusers’ complaints confidential. When complaints weren’t confidential, perpetrators and others could retaliate against the accusers. When people understood that retaliation was the consequence for speaking up, trust in the SHARP program disappeared.

A few statistics to drive home the point:

Those numbers are awful. They show a deep distrust among employees in the compliance program that Fort Hood had created to address the scourge of sexual assault.

That’s a scenario far too many corporate compliance officers encounter here in the private sector. Your organization has a compliance program that exists and operates — like, show me the world where you’re not busy — but at the same time, nobody believes the compliance program really works; it never makes the underlying problems go away. Then everyone sits around lamenting, “Why can’t we solve this?”

We all understand that dynamic at the abstract level. The Fort Hood report provides a painful example of the converse, and everything that can go wrong.