I am a bit of a history buff, so lately I’ve been reading Nuclear Folly, a new chronicle of the Cuban Missile Crisis written by Ukrainian history professor Serhii Plokhy. Little did I know when I began reading it, that a central lesson of good corporate governance would be a major theme of this book.

Nuclear Folly recounts the political and military machinations of the summer and fall of 1962, when the Soviet Union placed nuclear missiles in Cuba and President John Kennedy had to stare down Soviet supremo Nikita Khrushchev until Khrushchev agreed to pull them out.

If you’re a history fan too, I recommend this book highly. Plokhy had access to troves of documents from Russian, Ukrainian, and Cuban, sources, which gives us in the West a new window into the tensions of the time. Rather than dwell on everything that Khrushchev and Kennedy got right, Plohky devotes his time looking at things both sides got wrong — including how the misrepresentation of facts can create enormous risk.

That’s the lesson here for ethics and compliance officers. Allow me to elaborate. 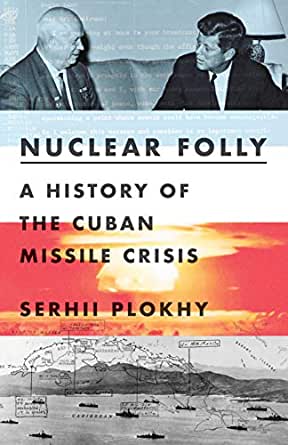 The Soviets brought their missile equipment into Cuba in late summer 1962. A key part of Khrushchev’s strategy was that the equipment would be hidden by the Cuban jungle, so that U.S. surveillance flights over Cuba wouldn’t discover the missiles while they were being assembled. Then Khrushchev would present the fully functional missiles to the world as a fait accompli, and the Kennedy Administration would have no choice but to accept the nuclear threat and never invade Cuba.

Except, that’s not what happened. While the Soviets were preparing to ship the missile components to Cuba, Khrushchev sent a military aide, Sergei Biriuzov, to scout suitable locations for the missile bases. Biriuzov couldn’t find any. The Cuban jungle was too thick in some places, too meager in others. Nowhere did the terrain provide just the right cover so that the Soviets could assemble the missiles undetected.

So what did Biriuzov do with that unpleasant fact? “Biriuzov… simply told Khrushchev what he wanted to hear: there was sufficient natural cover to deploy the missiles so that the Americans would not detect them,” Plokhy writes.

And yet again, we’re back to the importance of a speak-up culture, and how flaws in leadership and organizational culture can stifle it.

Why Culture Must Support Speaking Up

Think of things from Biriuzov’s perspective. He had endured Stalinist Russia, where speaking an unpleasant truth to those in power could get you killed. He’d also witnessed Khrushchev and his henchmen shoot Lavrentiy Beria, the short-lived successor to Stalin until Khrushchev eliminated him to consolidate power.

Given that experience, would you rush to tell the supreme Soviet leader something he didn’t want to hear? I wouldn’t. Nobody in Khrushchev’s inner circle did either. From that reluctance to speak up came the Cuban Missile Crisis.

To frame things in the language of corporate compliance: the Soviets had fostered a corporate culture that stifled sincere, honest dissent. So nobody told Khrushchev that the potential harms of his idea far outweighed the potential benefits. Nobody told him that his vision couldn’t be squared with facts on the ground. His coterie of advisers existed to implement his ideas, not to help him identify the right ideas in the first place.

Contrast that to what happened in the Kennedy Administration. President Kennedy and his brother Robert formed a crisis council known as the Executive Committee. “ExCom” met constantly through October 1962 trying to debate and develop options for Kennedy. Theirs was much more engaging dialogue than anything Khrushchev allowed.

For example, Kennedy was looking for a diplomatic solution, while generals and other advisers pressed to launch an invasion — and they told the president as much, to his face. Kennedy almost had to drag his coterie to the strategy they ultimately pursued: in exchange for the Soviets removing their missiles, the United States promised not to invade Cuba and removed its own nuclear missiles stationed in Turkey.

Again, in the language that compliance professionals use: the U.S. government had fashioned a corporate culture that encouraged frank discussion. The cultural mores of America allowed advisers to speak truth to power without worrying that they might get shot. Kennedy understood that his advisers’ opinions and views (however flawed those might be) came from a love of country and a desire to solve the problem — not a desire to placate the boss so you could avoid exile.

From those different dynamics, the world managed to bring itself within a whisker of nuclear destruction, and then pull itself back.

Leadership, corporate culture, speaking up, ethical values: these things are all connected. Corporate governance is about stitching them together in the right way, to assure that you have a strong, vibrant organization where everyone works together for the greater good of the whole.

My go-to reference for these ideas is Good to Great, the seminal work on corporate success written by management guru Jim Collins. He defines five levels of leadership, and a Level 5 leader is what we’re talking about here. Someone who stresses the corporate mission more than his or her own role in achieving that mission. Someone with humility and self-awareness. As Collins put it:

Level 5 leaders display a powerful mixture of personal humility and indomitable will. They’re incredibly ambitious, but their ambition is first and foremost for the cause, for the organization and its purpose, not themselves.

I don’t know whether Kennedy was a Level 5 leader, but predecessors like Washington, Lincoln, and Truman all were. Their leadership in the past cemented the “corporate culture” of America by the time Kennedy needed it most: October 1962.

Nothing like that existed in the Soviet Union. That country had no institutions and no ethical values other than loyalty to the supremo. So its corporate culture failed, and ultimately that organization ended up on the ash heap of history.

Don’t think any of this matters to corporate life? Consider the so, so many cases we’ve seen of superstar CEOs who demand loyalty above all: Steve Wynn, Bernie Ebbers, “Chainsaw” Al Dunlap, and even Donald Trump.

Do you think their inner circles were more like Kennedy, or more like Khrushchev? Would you want any of them running the show during the Cuban Missile Crisis?

That’s why this stuff matters.